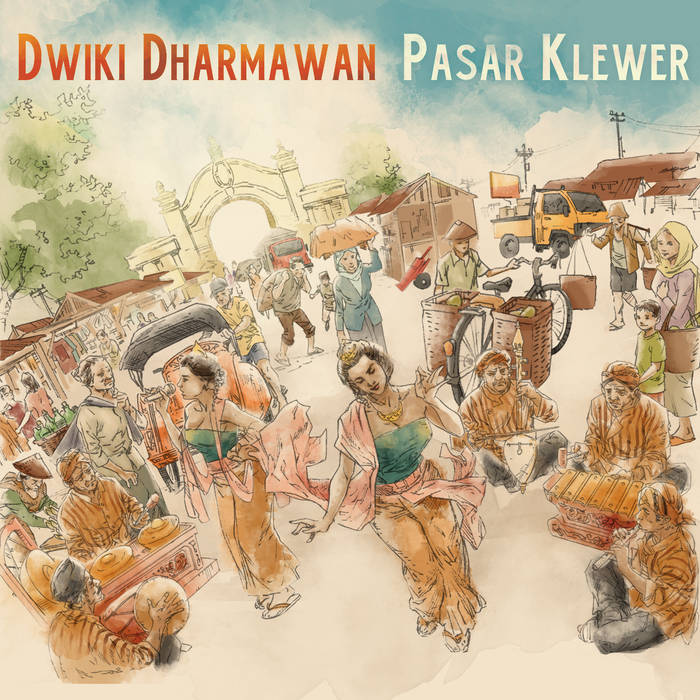 Peter Jones How can music be this good? It's both unlike anything else and such a great example of jazz at its height. With Stavi and Sirkis, Dharmawan has a core trio with an all star pedigree, supported by equally powerful featured artists. Favorite track: Tjampuhan.

Carsten Pieper Another gem from Indonesia - er, well, from London, mostly ;-)
Indonesian keyboard master (here just on piano) is joined by some fellow countrymen and kind of MoonJune's usual suspects.
Stylistically a wide ride, from gamelan over Canterbury to klezmer-like things. Too quote MoonJune Records: It must be Jazz ;-) Favorite track: Bubuyu Bulan.

Leonardo Pavkovic One of the all time highlights on MoonJune. 5 stars in DownBeat Magazine, December 2016 issue. One of top releases in 2016 according to DownBeat. Favorite track: Pasar Klewer.

Harold Blackwood I have quite a few favorites on this album but this is the one that sticks out the most for me, the instrumental version is awesome! Favorite track: Forest.

5 stars. Masterpiece. A truly original work of art. One of the best jazz albums in 2016. - DownBeat Magazine, USA

"Dwiki Dharmawan is a true master musician, composer and conceptualist. (...) Few albums in the last couple of decades have matched the breadth and scope of Pasar Klewer, its often inspirational musicianship and the brilliance of its overfall conception (...) an exemplary example of how glocal influences are feeding into jazz to create something that is both part of the universal language of jazz and an individual expression of local, social and cultural identity" - Stuart Nicholson, JazzWise Magazine, UK

"This is world fusion on an epic scale, bringing jazz together with progressive tendencies, and then wrapping it up on a musical form that is quite different to western ears as he mixes it all up with styles from his home. There is a freedom and space within the music, that makes it feel live a living breathing entity, and very quickly the listener is immersed in a brand-new world. It is full of energy, full of life, an amazing musical experience." - Kev Rowland, Jazz Music Archive

Pavkovic describes keyboardist Dwiki Dharmawan as "one of Indonesia's most prominent musicians: a cultural icon in his homeland and accomplished pianist, keyboardist, composer, arranger, performer and peace activist. A true cultural activist and ambassador of his beloved country, Dwiki has forged a very successful thirty-plus year career, performing in over sixty countries with solo and collective projects."

So Far, So Close (2015) was Dharmawan's pan-cultural, fusion powerhouse MoonJune debut, but for his second MoonJune effort, Dharmawan wanted to try something different. "Indonesia is the place of 'ultimate diversity,'" the pianist says. "Here, the urban cultures accelerate the 'acculturation' process, which generates changes in cultural patterns and creates new forms of musical expression. Pasar Klewer is the answer to my search for 'the difference,' and also a valuable answer to our modern crises and urban uprooting. The album's distinctive sound originates from an ancient Gamelan tonal system called Salendro, known in the Karawitan traditional music of the Sundanese, Javanese and Balinese. Based on the Gamelan tonal system, I also adapted, as my inspiration, other musical elements from all over the Indonesian archipelago, as well as the western diatonic system."

Pasar Klewar's exhilarating opening title track, indeed, possesses a microtonal-informed melody drawn unmistakably from Dharmawan's cultural roots; but its modal nature also affords the pianist and his band mates the freedom to explore everything from Metheny-esque landscapes (though Wingfield's heavily overdriven electric guitar provides a completely non-Metheny vibe during his light-speed solo) to a mid-song shift in mood, where Stavi and Sirkis drive Dharmawan's post-Coltrane, Tyner-via-Beirach-through-Corea exploration of spiritual freedom with similar passion and fire.

Daryono takes an impressive vocal/rebab (three-stringed violin) solo before some empathic three-way interplay amongst the core trio leads to a thoroughly musical drum solo reaching deep into the heart of the song before Stavi and Dharmawan re-enter, bringing this twelve-minute epic to a finish with another brilliant piano solo of grand proportions. Cross-pollinated with Wingfield's additional fiery interaction, the music builds to such a climactic peak that, when it suddenly comes to a stop, the band members shouting "Yeah!!" is left to conclude the track, reflecting the energy clearly felt in the studio.

Its overall freedom may come as a surprise to fans of the more easily digestible So Far, So Close...though that's not to suggest Pasar Klewar is lacking in beauty, flat-out lyricism or eminent appeal. "Interaction with each other is very important, as each musician contributes an energy that then coalesces into an explosion of energy together," enthuses Dharmawan. "It is not always easy for me to achieve my musical journey's goal, but I always enjoy the process of the search. So Far, So Close represented my musical passion as a young, growing musician; now I feel more mature in exploring my musical inspirations...and I think that this is will be never-ending journey."

If So Far, So Close and even more ambitious Pasar Klewar are any indication, then this is very good news for those fortunate enough to be hearing this remarkable Indonesian artist and a group that may have come together for the very first time in the studio to play Dharmawan's music, but came ready-made with the intrinsic chemistry so important to music this intuitive/interpretive. If there's any justice in the world, the name Dwiki Dharmawan will soon be on the lips of jazz fans around the world and Pasar Klewar the album that turned this Indonesian star into an internationally renowned jazz figure.

Bonobo stops by to talk about his new record Fragments