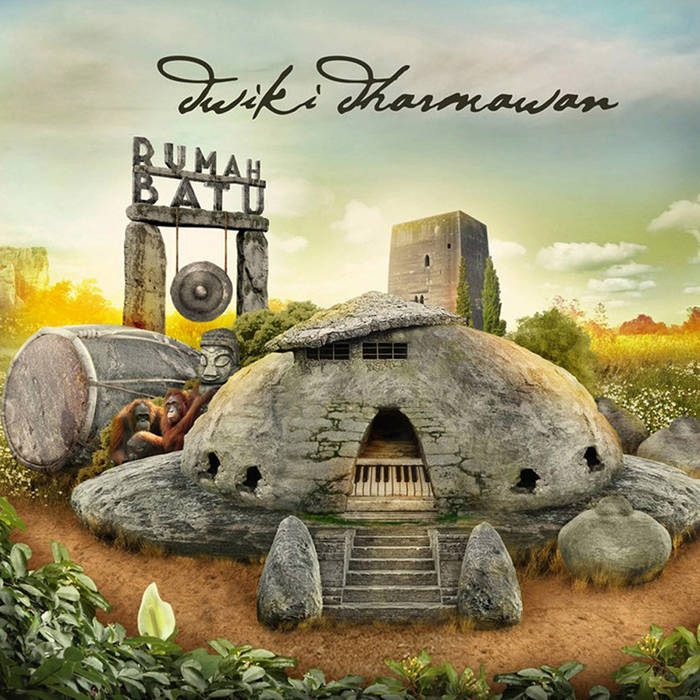 Carsten Pieper I keep asking myself with each new album that Mr. MoonJune, the incredible Leonardo Pavkovic, announces as another gem from Indonesia, if I really need it...
... and after listening into it, the answer always seems to be: Yes, of course, this is, well, another gem from Indonesia!
OK, technically speaking, the core of this music has been recorded in Spain by an international outfit of top instrumentalists, led by Indonesian keyboard master Dwiki Dharmawan. East meets West, highly recommended! Favorite track: Rintak Rebana.

Make Weird Music This is a fantastic album! Covers a lot of territory with something for all tastes. I love it!

Riding the momentum of 2016's groundbreaking, critically heralded release, "Pasar Klewer" – an album awarded a 5-star review by Downbeat, All About Jazz, and numerous others – MoonJune Records is proud to present the phenomenal new album by the iconic keyboardist, composer and producer, Dwiki Dharmawan. Drawing from both his extensive jazz influences and his rich cultural heritage, the Indonesian maestro delivers yet another spellbinding masterwork!

The album chronicles yet another magical session created and captured at the already-infamous La Casa Murada. Situated in the tranquil, picturesque setting of the Catalonian wine region of Penedès, Spain, the studio's recordings seem to take on a life of their own; and Rumah Batu is certainly no exception: articulating jazz's continuing evolution in the 21st century.

For those who wondered what Messenger Dharmawan could possibly conjur as a follow-up to Rumah Batu's unanimously praised predecessor, prepare to be amazed and perplexed -- and escorted on a musical sojourn unlike any the genre has ever witnessed!

Special thanks to three very dear friends: Iga Indrawati, Bagus Wijaya Santosa and Leonardo Pavkovic, without whom this album wouldn't be possible. Additional thanks to Jesus & Eli Rovira, Dusan & Dragana Jevtovic, Mark Wingfield, Francisco Macias, John McGuire, and all musicians on this very special album for me.

An ardent supporter of Indonesian’s next generation of musical prodigies, Dwiki owns and operates the Farabi Music Education Center. Serving as director, role model and mentor, he is helping to promote the continuing evolution of jazz in the 21st century and molding some of its most promising young practioners.
Dwiki’s association with NYC-based MoonJune Records – a label with a pedigree of producing progressive, adventurous-minded music of the highest caliber – continues, with several more exciting, ground-breaking albums on the horizon. Noted musical entrepreneur and sonic thrillseeker, Leonardo “MoonJune” Pavkovic thrillseeker – owner of MoonJune Records, NYC – had this to say about Dwiki’s upcoming release, “Rumah Batu“:

“As great an album as Pasar Klewer unquestionably was, I think Dwiki has gone even further into the unexplored recesses of jazz with the new album (‘Rumah Batu‘). I’ve been a huge fan of jazz for the bulk of my life – having listened to literally thousands and thousands of albums … this is one of the greatest, most innovative jazz albums I’ve ever heard – by ANY artist!”